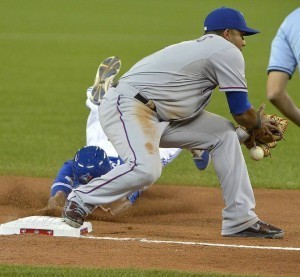 3 ways to prevent the big meltdown

I took a few steps to my right at second base to field a simple ground ball. I dropped it… Run scored, game over!

I then proceeded to punch the brick wall of the dugout before getting on the bus, I probably broke it (my hand, not the wall), I don’t remember. All I know is that I now wouldn’t play the next game. There’s always two types of pain…

Here’s how to stop the big meltdown.

Mistakes happen, errors and failure are a painful part of the game. But, what happens next is still most important. The next play or the next day. Read our article on  What happens when we experience the BIG LOSS?

The University of Northern Iowa suffered the worst meltdown I’ve ever seen. Up 12 points vs. Texas A & M with 44 seconds remaining to reach the sweet 16. They were a good team!!

The Texas Rangers had an epic meltdown in Game 5 of the series with 3 consecutive infield errors soon followed by a 3-run homer. I felt bad for Elvis Andrus.

The Bartman incident in 2003 with the Cubs, led to a meltdown by Alou, followed by a walk, followed by a base hit, then a crucial error by shortstop Gonzalez.

Meltdowns are like a huge wave crashing into the shore.  One mistake leads to another. There is a science behind the collection of mistakes. Catastrophe theory.

To prevent the big meltdown is that the one mistake and the adrenaline and anxiety tip past the point of return.

Then there becomes an extreme drop off in performance, hence, catastrophe. These meltdowns occur in bigger moments because of the importance of the situation increase, so does the overall anxiety level. Mistakes earlier in a competition can be let go of easier because there’s still a lot to be played.

Here are three ways to prevent The Big Meltdown

Once the error happens later in the game, use the time-out! Coaches can ease the tension and uptightness by making the transition from problematic to relaxed. Rallying the troops means to assemble everyone and bring order. The time-out allows this to happen. Too often, this gets overlooked.

During the time-out, reinforce the belief and poise in the players and team. Have them own the awareness that it’s not about the setback, it’s about the comeback. So what? Next play.

During stressful and emotional situations, we revert to how we trained!  If we have practiced remaining calm, breathing, refocusing, then we will implement these skills when they are needed. These skills are the best at removing the emotional situation and focusing on making the next play. Mental Toughness prevents the big meltdown. To keep your head when others are losing theirs.

Listen to the cockpit recording as Captain Sullenberger experienced the depth of emotions when his plane struck the gaggle of birds shortly after take-off in New York. He remained calm as a Hindu cow because his training allowed him to re-focus on the task at hand, successfully landing the full plane with no power in the most populated area in the entire world.

Prevent the big meltdown by applying this…After a mistake, using the time out, and removing the emotion: what’s our plan? Short-term goals like make a stop, get an out, knock it down, throw a good pass, aggressive serve, etc. What’s the immediate goal?

Larry Bird stealing the in-bound pass or Reggie Miller scoring 8 points in nine seconds both had an immediate focus on the goal, make a play!