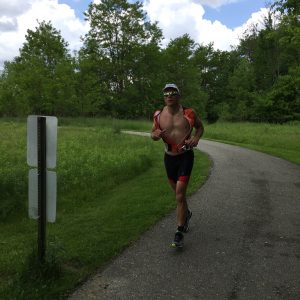 The reason I only signed up two weeks ago to complete his race is because of biking (and a lack of training). I haven’t biked in about 10 years. I even had to borrow a friends Trek for the race.

The bike I was borrowing had GatorSkin tires, which are the ultimate in protection. I need not worry about a flat tire. Good thing because my bicycle maintenance was certainly not up to snuff either.

At the top of the hill, BAM! My back tire went flat.

Boy Scouts were turning over in their graves for my lack of preparation. I had none of the necessary materials needed to change the tire. No bike tube, cartridges, levers, or fix a flat, nothing! I was utterly helpless.

I assessed the damage, cursed, and tried to figure out a plan. A house was nearby which I ran to borrow their phone and call the race team, director, somebody. I was not in a good spot.

All the while, bikers are cresting the hill and passing me. Helpless….

Then a biker actually stopped!!! He handed me his tube, levers, and cartridge to fix the flat. He then asked if I knew how to change it and in my most honest voice, said “no sir!”

The saint who stopped to help change the tire was named Glenn Maenhout. It took crazy bold mental toughness to stop his entire race to help out a stranger. WOW!  I thanked him so many times and watched as he fixed the tire. When he finished,  I told him I would find him again. It felt like a Disney movie scene where he’s riding off and I’m yelling, “I’ll never forget you.”

We often can’t know when our Hinge moment will be. The person who is going to make such a difference in our lives.  If not for Glenn, I would not have finished in time. The entire ordeal took about 20 minutes, and the clock doesn’t stop.

As I proceeded to tell other coaches and friends about Glenn a strange thing occurred. Because they were all shocked that someone would do that, it made more of an impact what a generous, kind, and selfless act that he performed.

I then asked myself  “Rob, would you have stopped?” When it comes to race mode, I cheer, thumbs up, and support other competitors along the way, but I’m still focused on running my race….

It is these moments that I am in awe of the servant leadership that people can perform when place in situations to do so. I hope I can answer “yes” and have the mental toughness to stop to help! 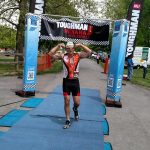 I did stop here at the finish…