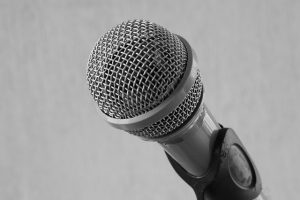 On a long run , I passed two people and asked them for what race they were training. She said a half-marathon, but hedged her statement with, “If my speed work is good enough.”

I gave her unsolicited advice and told her she was ready and just to sign up that night instead.

I’m not sure she agreed. I felt like an idiot so I just ran faster.

She was basically doing what we all do. She was testing herself for the race instead of training for the race.

She was playing the if/then game.

If her runs were good enough, then she would sign up.

We test the microphone.

Bands do a sound check. Plays and weddings have rehearsals.

The difference is that they’ve committed to the event, they are preparing. Imagine instead if a band did a sound check weeks before the event and only if that went well, then they would do the gig. However, that’s often what we do.

Teachers in school don’t give a final exam and then prepare you later. That’s what life does, life gives you the test first and then the lesson comes after.

When we test ourselves, we are operating under the mentality of, “Am I good enough right now?” or “If today was the event, would I be ready?”

Testing ourselves is brutally flawed thinking and it adds undue stress.

The flawed thinking is that the event isn’t here yet, so while it would it be nice if we were ready, we don’t HAVE to be.

Our Preparation Matches Our Commitment.

Instead, when we are training ourselves instead of testing ourselves, our mindset changes.

When we train, we no longer evaluate if we are ready, but approach it more as if “what do I need to work on?” Yes, we will still think about the event and compare ourselves, but now there is a context and a backdrop. Instead of testing ourselves, we are now training mental toughness.

We operate in training mode by first recognizing when we actually need to be ready.

A poor training session can then be learned from because the event isn’t here yet, so we are still preparing. We are training ourselves. We are also training our grit and resilience by staying in the moment and not thinking too far ahead, which again only adds undue stress.

Remind yourself- I will be ready when the event is here!

Someone asked the other day if I was ready for a talk I was giving to a company. I said,”NO, I’ll be ready then.”

I wasn’t speaking at that exact moment, so I didn’t need to be ready.

No need to test myself, I was still in training mental toughness mode.

I went home and prepared some more.