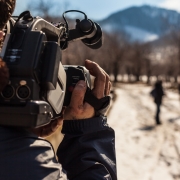 Our initial thread of 10 Mental Toughness Documentaries That Will Make You Better has been one of the top of google searches since it was released.

There isn’t much that we do as a team or family which isn’t directed toward achieving some goal. Hence, any Netflix shows we watch are all in the genre of Sport Psychology.

We won’t post a mental toughness documentary checklist that sucks.

Even though these films are not all sport focused, (even though everyone is an athlete), they are centered around greatness and the skills needed to achieve your best.

A documentary about session and touring musicians that are hired by well established and famous bands.  Kenny Aronoff and Rudy Sarzo both star in this epic film and were both guests on the podcast- 15 Minutes of Mental Toughness.

These hired guns may not be household names, but are still masters of their craft.

If you’re curious about what it REALLY takes to be great and just how damn talented everyone is, watch this one.

David Foster: Off The Record- (Netflix)

I was ignorant the impact that David Foster had on the entire music industry.

It’s an inside documentary, warts and all, and you’ll witness the sacrifices and the utter obsession toward greatness and perfection. The spoiler: Even at the highest of achievement levels, he still felt “not good enough.”

In relentless pursuit of his best: The Journey of Ultrarunner Zach Miller- (youtube)

I had the pleasure of having Zach also a guest on my podcast- 15 Minutes of Mental Toughness. Hmmm, I’m seeing a theme…

It was a huge hinge moment!

This victory propelled his running career into being a professional. Billy Yang produced this film and it follows Zach’s journey, ups & downs, faith, and reveals massive insight into how he operates and his unique approach toward races…

These two amazing coaches crossed paths very early in their respective careers. They even coached together at The Cleveland Browns finishing with the Number #1 defense, an 11-5 record, and a playoff win.

These two incredible minds met up every off-season and this time it was recorded. If you want insight into coaching, leadership, and what it takes to succeed (and fail), you’ll seriously dig it.

My favorite quote from this mental toughness documentary- “It’s not about what you want, it’s about what are you willing to do to get it.”

“It’s not about what you want, it’s about what are you willing to do to get it.”

9/11: Phone Calls from People Trapped in the Towers- (Amazon prime)

When we refer to mental skills, perspective and gratitude may be the most under-appreciated.

We all know where we were when the tragedy took place and to this day, whenever I watch something about September 11th, I still become emotional.

Over 3,000 families lost loved one’s that day, and the twin towers collapse was so forceful that only 300 bodies were ever recovered.

We were only able to watch what took place on the outside. The audio accounts provide details from inside of the towers.

These intimate stories of people trapped inside of the towers shed light into the choices people made during their last moments. Some people were able to make calls and get through and some merely left voice messages. It gave some families a lasting memory that they held onto and processed and grieved through.

It also shows the strength and struggle of the first responders who strived valiantly to help others, specifically battalion chief, Orio Palmer.

This is the shortest of the films and perhaps the most poignant.

This mental toughness documentary focuses on hero Welles Crowther, who saved 10 people that day inside of the towers.

This is the type of person that every parent wishes they would raise. In the most hectic calamity unfolding inside of a person’s life, he was thinking about and saving others…

Untold: Malice At The Palace- (netflix)

I was in Philly the night before running a marathon when I saw the melee. Years later, I spoke with Eddie Gill who was on that Pacers team and how that Hinge moment transformed and wrecked that championship team.

At the time, the media coverage of this episode portrayed the Pacers with just one descriptor: Thugs. And this narrative was echoed across America and throughout history.

This cathartic documentary by Jermaine O’Neal discloses what really happened and uncovers the honest truth.

Tiger is a two-part HBO documentary.

I’ve studied many of the greats, and this film provides much insight in which I was unaware.

It uncovers the obsession and plan that his father Earl Woods had for Tiger. The film focuses on their relationship and upbringing and it is quite revealing.

The dangerous and real impact of social networking.

I’m a skeptic, and not much of a conspiracy guy. However, there’s a reason why our society has become so polarized and much of it stems from the different messages that various people receive.

Ever wonder why you receive ads that are just what you needed or at least pique your interest? Or perhaps why on youtube, they have perfect “suggested videos” for you to watch.

It’s no accident… This Mental Toughness Documentary is chosen because of the addiction and reliance on social networking and specific steps that can help curb it.

Here’s why Hamilton is on this list since it’s obviously not a documentary.  This checklist includes Hamilton because it is the closest thing to perfection that I’ve ever witnessed.

Now, if you do not like history and struggle to appreciate musicals or hip/hop, then you may not consider it as such, but it won’t change this author’s opinion.

If you want a more detailed list of documentaries and even popular “movies” with some Hollywood added in, then please check out the awesome list compiled by Dr. Sam Forlenza- Sport Psychology in Film Collection (SPFC) or Brian Lomax Inspirational List Of Movies