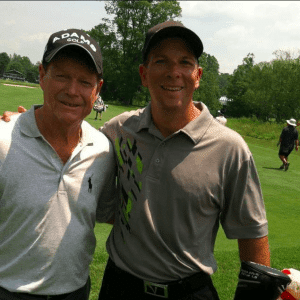 Everyone Is An Athlete, BUT Our Office is Different

I was caddying for one of my golfers at a PGA Tour event at The Greenbrier in West Virginia. During a practice round, we played with Tom Watson for the entire day. What a treat! As we were walking down one of the fairways, he put his arm around me and said, “This is such a nice office.”

I’ve been borrowing that line ever since because it is true.

Everyone is an athlete our office is just different. Some of us are corporate athletes or entrepreneur athletes. Being an athlete is an attitude and awareness. It means looking through our own lens of life as an athlete.

First, as an athlete, we compete.

Competition has always been part of humanity, ecology, and biology and at its basic level, competition for space or resources. Some are drawn toward this type of competition while others often shy away from it.

However, true competition is me vs. me.

Too often is only viewed as an “I win and you lose” concept. This viewpoint of competition has been easily perverted into trying to beat someone else, which turns into a mindset of there can only be one winner. We confuse competition only against some other opponent and thus create a mindset of scarcity, fear, and isolation. See with the “I win, you lose game”, the opponent can become anyone outside of ourselves, even our own teammates or co-workers. The scarcity is born from there can only be one promotion, one president, one “winner”, so it must be me.

Competition against ourselves is the most difficult part because we already know everything about our opponent.

Competition against ourselves is the most difficult part of being an athlete because we already know everything about our opponent.

Competition is especially difficult because we can compete in everything we do.

We can compete in our job, our relationships, and our physical endeavors. We can compete in being a friend, a spouse, father, mother, teacher, etc. We do not always compete against others, but against a much tougher opponent, ourselves. Competition is about challenging ourselves about how good that we can become

When we focus on becoming the best version of ourselves, it means that there are setbacks, pain, adversity, suffering, struggle, and learning. However, there will also be growth, joy, thanksgiving, satisfaction, and true success.

Second, being an athlete means being in shape.

When we show up to our office, we need to be conditioned. Yes, there is some physical fitness to our lives, and an over all well-being. But, obviously, “everyone is an athlete” mentality doesn’t mean that we need to be able to play 90 minutes of a top-level soccer game.

Being well-conditioned means that we show up early, are able to be present, deal with others in effective manners, commit and contribute to the overall mission, and simply be other person focused.

Third, as an athlete, we are are always training, practicing and preparing.

A funny thing about competition and practice is that we will practice WAY more than we will ever actually compete.

How many tennis balls have a Wimbledon champion hit in their entire life? How many mountain climbs has someone done before a successful first ascent? How many range balls or simple practice rounds has a Masters champion finished, or practices has an NCAA Volleyball champion completed?

An athlete competing in the Olympics will have just one event or at most maybe a couple events. Thus, 99% of their time invested in the previous four years has been in preparation.

We will practice more than we will ever actually perform. Thus, our preparation is in many regards more important than our actual competition because when our moment arrives, it’s too late to prepare. We will need to be ready because we do not know when or who will be our hinge moment. That’s why everyone is an athlete.

Why Unemployment Motivates Me
Scroll to top