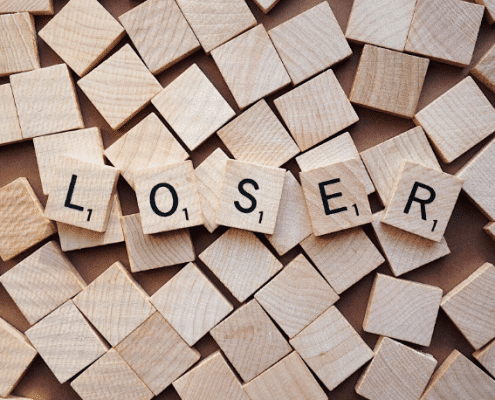 How I Changed My Life From Being A Loser

Now, I wasn’t always a loser. It was a slow fade across many years.

My childhood was full of athletics, family, academics, friends, and more athletics. But along the way, something changed.

Maybe it was pain from parents divorcing and my family splitting up, or anger from no longer being the best at sports because I failed to work hard. Or maybe it was resentment from a changing of coaches who cared to those who didn’t.

What I do know is that I was intent on being with the in-crowd. I slowly became a loser when I started high-school and started partying, and that meant drinking!

Road parties, house parties, or just riding around, it all involved drinking. And in a town known for its liquor stores, drinking meant hard drinking. I wanted to have a good time and hang with those who did the same. That was it.

One doesn’t become a loser overnight. Rome wasn’t built in a day, but it wasn’t destroyed in a day either…

One doesn’t become a loser overnight. Rome wasn’t built in a day, but it wasn’t destroyed in a day either…

Once I reached the end of my junior season of high-school, Pot was introduced to my life. I never wanted it before, but soon, I couldn’t get enough of it. It actually became my drug of choice.

The night before my senior year of soccer, I was arrested.

I was partying with friends just two days before the first game and was arrested for possession of marijuana. I was promptly kicked off of the team. It was devastating.

That was a participation trophy toward becoming a loser.

In my small town where everyone waves to everyone, I was no longer waved to. I was now pointed at. I made a mistake, but I wasn’t bad. That hurt, more pain…

I was scared straight and worked really hard for my upcoming baseball season. Weights, training, hitting, being a leader, I was ready.

A few hours before the home opener, during the last period of the day, with my freakin’ baseball uniform already on, I was called to the principal’s office. A sheriff awaited in the office and the principal proceeded to ask me about incidents in the weight room and a broken piece of plexiglass. Unbeknownst to me, a $600 scale and another high priced piece of equipment had been recently damaged in the weight room.

I explained what happened, earlier that week, I was on a dip machine during weight class and it accidentally rocked back and smacked and broke a piece of plexiglass. But, since I was cool, I then rocked it back on purpose and broke it some more. That was it.

I was ordered to pay $12. But I was immediately suspended for 5 school days.

The dismissal bell rang for the school and I’ll never forget that feeling of being in my uniform, starting shortstop, the first game of my senior year, and getting escorted to my car and driving home. I wasn’t allowed to even tell the coach what happened or talk to the team. I vaguely remember sitting alone in my kitchen as my dad came home and remember how disappointed he was.

As I returned to the team, I was so angry, that I took it onto the field with me. I tried to get those missed games back and it was life or death on every game and every at-bat. I put so much pressure on myself that I crumbled throughout the year. “Underachieved” would put it kindly.

Drinking is the cause and solution to all of life’s problems.

Drinking is the cause and solution to all of life’s problems. I returned to that coping mechanism after the season ended and self-medicated.

Now, I felt at that time, I had received my diploma in being a loser.

I went to college an A+ student in partying. The solution to all of life’s problems.

It was a month into college and I was trying to walk-on in baseball, when at about 2 am one evening I walked off an 80-foot cliff. Most people fall off a cliff, I walked off. Not on purpose, but because we were partying near a cliff!

Drinking was now the cause of the problems. Medics had to crane me up out of the crevasse, where I had split open my head, fractured my back, and broken my arm. But, I was alive!

This accident happened on a Friday and I was back to school on Monday. See, my mom is the oldest of eight, Catholic family, she had zero sympathy. She sent me right back to school, where I was now in immense physical and emotional pain. Try walking around college being pointed at because you were now “that guy who fell off of the cliff!” Baseball was simply no longer.

I considered this winning national championship in losing.

And when you lose, my belief used to be “you’re a loser.” So, I again acquiesced to the solution to life’s problems. I drank…

On April 20th, my second semester in college, I was driving back to school after drinking all day during an earth day festival. (It’s interesting how well we remember small details from events that become so significant in our lives.) I can recall the whole day and especially the drive, because…

I distinctly recollect my car crossing the center line and striking an oncoming van. I was airlifted to Maryland hospital; I had struck the windshield and fractured my face and broken my collarbone.

Months later, I went to have the wires pulled from my mouth because of my broken jaw. The doctor untwisted and pulled out the wires with no local injection mind you, but my gums had grown over the wires and blood gushed over every extraction, and it was excruciating!

I mention this because that still didn’t hurt as bad as messing up and apologizing and begging and pleading to the elderly woman whose van I had struck. It was like I was talking with my own grandmother. (Her husband didn’t talk to me (I don’t blame him)). It was a miracle that they were not hurt. It was a miracle I wasn’t killed or even hurt worse.

There is nothing more dangerous and selfish and stupid than driving while intoxicated. I didn’t care at the time about hurting myself, but I NEVER meant to hurt anyone else, so I’m not making light of this situation when I state that…

Drunk driving was winning an Olympic medal in becoming a loser.

How I Changed My Life From Being a Loser

One small victory came from that even though I had all of this going on during my freshman year, I still finished all of my classes, I never, ever dropped a class.

I never gave up.

I graduated with my undergraduate degree and I was so blessed to be able to discover sport psychology. I knew what I wanted to do for the rest of my life. However, programs are competitive, so when I was accepted into Temple University with a graduate assistantship, I knew I was given a second chance at life and I wasn’t going to blow it.

I now had a vision and better discipline.

Being “all-in” is a cliche’ and a good tee-shirt saying, thrown around too often life. So, being “all-in” for me meant discipline. I read most of the class textbook and three complimentary sport psychology books before graduate school even began. I sat in the front of the class, read journal articles, went to conferences, and never missed one day.

I got into the best shape of my life (at the time), working out, and running every day. I trained and competed in the Philadelphia marathon.

9/11 happened while I was getting my masters degree and Temple University never closed; I had a night class, so I went. The teacher and two other students showed up. I think they were “all-in” as well.
I also worked during grad school and rode my bike home in North Philadelphia to the Art Museum at 9 or 10 pm every weeknight. I taught golf, so I would also have my clubs on my back as I rode down the city streets.

Can you picture that? I didn’t care one bit.

When podcasts ask about my greatest accomplishment, besides being a father, it was finishing my thesis.

I showed up to graduate school sucking at writing. I mean, awful. It took me an entire year to do an original research study and write a thesis. My thesis was hundreds of pages and every single line and space had to be PERFECT!

My professor, Dr. Sachs, probably did a hundred of revisions. Even after it was complete, it was never complete, there was always another change here and there… The joke was, there are so many revisions to my thesis, that after it was done, it probably went full circle and was back to the original draft.
Discipline and having a vision was how I changed my life from being a loser.

I no longer drink and have been in recovery for years. I’m a husband and father of two. I’ve finished an ultra-marathon and completed an Ironman, I’ve written six books on mental toughness (so far), and have worked with Olympic medalists and champions on the PGA Tour. I’ve spoken at the NFL combine, Fortune 500 companies, and universities across the United States.

I’ve been the mental coach at University of Notre Dame and Indy Eleven and have caddied on tour. I’ve focused on coaching executives and the podcast- 15 Minutes of Mental Toughness podcast has taken off.

But, here is the most important factor for my life from being a loser.

Check out this podcast episode from Coach Matt Deggs and hear his awesome story of redemption.

I was blessed and redeemed. It doesn’t take someone from Mensa to understand that I should have died twice.  It was out of my control.

Those worst days actually became my best, because I developed the gift of perspective and gratitude. I experienced the pit of despair and disappointment. I never wanted to return. So, I knew whatever struggles I had, it wasn’t as bad as it had been. It allowed me to appreciate every single thing that I took for granted.

The pain of discipline never weighs more than the pain of regret.

I don’t know why God spared me. Yes, I believe wholeheartedly that God protected me from death. There was guilt from it as well, because I don’t know “why” good people, much better than myself suffered, while I was given other chances.

I’m not writing that whereas I was blessed, others were not. I don’t believe that. What I do know that in this circumstance, there is no answer to the question “why.”

God’s redemption is the gift to us, what we do with it is our gift in return.

God’s redemption is the gift to us, what we do with it is our gift in return.

I only know that after winning at becoming a loser, there was a better way. I wasn’t going to waste another opportunity to live life to the fullest. If you’re ever given a second chance at life, you have to go all the way.

Follow Me!
Top 12 Mental Toughness Quotes For Your Mental Health

When I Get Depressed
Scroll to top