Any successful NFL kicker is the epitome of mental toughness, and Adam Vinatieri is the most clutch kicker of all-time. This is evident in his record four Super bowl victories; three of those as a result of his game winning kicks. 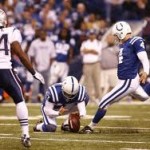 My intention from the beginning of the book was to interview Adam Vinatieri about his mental toughness, but also about his Hinge moment. The Hinge is that one moment, event, or person that connects who we are with who we become.

One of Adam Vinatieri’s Hinge moments occurred while he was a freshman at West Point. Now, I can’t go in depth here, that’s what the book is for, but the mental toughness he displayed during his time at West Point transferred into his kicking and wanting the game on the line.

Okay, so how did I get the interview? For starters, after re-reading Think and Grow Rich, I set my intention to interview him. When any of us set our intention on a target, we find a way to achieve that goal. It’s that simple. It’s never easy, but it is simple.

So, I contacted everyone I knew who might have access to him. I wrote several letters telling him about the book and its premise. I even showed up at the Colts camp. Every single function I was at, I even brought up the topic and inquired if he or she might have an “in.” No luck.

Until, my Hinge came along. The premise of the Hinge includes that one person who makes the difference in our lives. We may know hundreds of people, but it will result in just that one person, who gives us a break, or an opportunity, or introduces us to that right person.

Phil Richards, the awesome columnist of the Indianapolis Star was that Hinge. He made the connection and while at the Outer Banks on vacation with my family, Adam Vinatieri called me up.

Let me be honest, I hope this isn’t the end of the story, because I am still seeking a testimonial from Adam Vinatieri for the back cover of the book. He hasn’t (yet). A lot of it is out of my control now; if it is meant to be, it will happen. In the least, he provided an awesome story in The Hinge: The  Importance of Mental Toughness.

Dr. Rob Bell is a Sport Psychology coach based in Indianapolis. DRB works with athletes, coaches, and teams building their Mental Toughness.  His 2nd book titled The Hinge: The Importance of Mental Toughness will be released soon. Twitter: @drrobbell

Why Your Coaching Style Should Be Intentionally Left Blank | MetaCommunication

Load More... Follow on Instagram
How an unseeded player won the USTA Nationals Play this game and see if you’re a control freak.
Scroll to top