Collin Altamirano won the 2013 USTA Nationals—the most competitive junior tournament in the United States and an invite into the coveted U.S. Open. In doing so, he became the first unseeded player ever to win the event.

One of Collin’s strengths evident at the USTA Nationals was his ability to hit the best ball. His years of training and thousands of hits were evident. At every match, he moved opponents back, grinded out points, and took advantage of short balls by hitting clean winners.

They don’t give these championships away…

Collin, his family, and his coach Joe Gilbert, owner of JMG Tennis Academy have all had years of sacrifice and dedication to achieve this prestigious victory. While his family lived hours away in Santa Barbara, he trained with his coach in Sacramento living under his roof and his tutelage.

The environment created was one of discipline and hard work. You can imagine there have been many pats on the back as well as some kicks in the ass. Coach Gilbert stated, “I put a child that was not my own as a top priority in my life. We gained a relationship that was worth all the sacrifice. No matter where this journey ends we will always look back on the hardest times as the times we learned the most.”

Altamirano’s schedule also prepared him for Nationals. His training included a mix of ATP challenger events, USTA Junior events, & ITF pro circuit draws. Having qualified for 6 professional main draws during the season, these various types of matches and play brought forth both difficulty and success. He played many different opponents and improved at encountering several styles of play. In that, he learned more about himself and his game at each tournament along the way. In fact, he won a local pro event immediately before coming to the USTA Nationals, which help cement his belief in his game.

Due to his unseeded draw, he encountered two top players in the opening rounds. In both of these matches, Collin faced adversity and actually dropped the first set both times. In fact, during his second round match against the 16th seed, Deiton Baughman, he had never beaten him until that day.  However, he competed, made the adjustments, battled back and found a way to win. Collin showed his grit and confidence early on in the tournament and it carried over to each match, not losing another set the rest of the tournament.

In every match, and every tournament, there are hinge moments…The one point, game, or match that makes all the difference. Since none of us know when these moments will come, our role is to be mentally tough. Being able to bounce back and win early on provided Collin the confidence moving forward in the tournament and beyond. 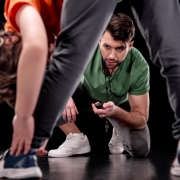 How I got Adam Vinatieri to contribute to my book.
Scroll to top