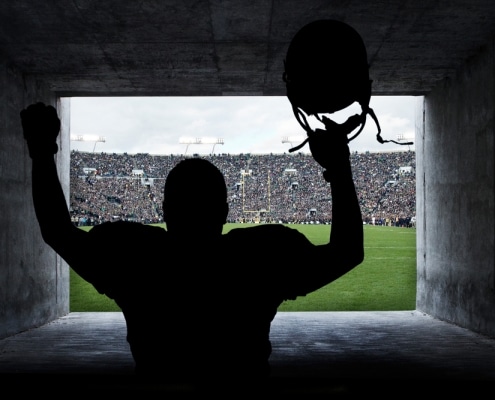 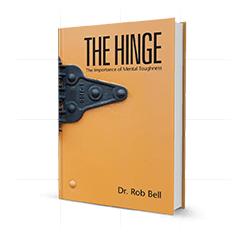 The following blog post is an excerpt from the book- The Hinge: The Importance of Mental Toughness

The skills of Motivation, Confidence, Focus, or Re-Focus are what we are working on in order to build our Mental Toughness.

(INFOGRAPHIC) The hierarchy of mental toughness illustrates this point.

The way we get confident is through our focus, and how we re-focus just reveals our confidence.

Hall of Famers are obviously the best and we often look at the Hall of Famers as having an extreme amount of confidence. Maybe this is true, maybe it isn’t. A lot of the best were driven by the fear of NOT being good enough.

The skill we need to look at is Focus.

How did Hall of Famers focus? Did they visualize their end goals and see themselves giving their hall of fame speech?

Or was it something else?

Studying Hall of Famers revealed some amazing insight into how they stay focused. They were focused on this season, this day and this play!  They were obsessed with how to prepare and simple get better.

What’s interesting is that the greatest in the world rarely spoke or thought about reaching the actual hall of fame!

The lesson is that the vision that we must possess should be short-term focused.

What assisted Hall of Famers to stay focused was their ability to re-focus!

Mistakes and major setbacks are going to happen, but the way you reach the Hall is by having a career of consistency. It’s the most underrated mental skill. The ability to re-focus is the second most difficult mental skill. It relies on how we let go of mistakes, let go of resentments, self-pity, and the curse of it all, perfection…

Our hinge becomes a doorstopper if we keep dwelling about the last play, our stats, or our performance. We become stuck if we allow mistakes to bother us so much that we become afraid to make any mistakes at all. That’s not how to stay focused!

Adversity and painful lessons will occur, but what matters most is how we respond to those obstacles! Check-out how these amazing competitors refocused.

It’s not about the setback, it’s always about the comeback! Can you withstand the hardships and failures that will happen to bounce back and overcome? Will you have a rain jacket ready for the rain?

We stay focused by doing our best on TODAY! That’s it! We do have to possess a vision of who we want to become, but this is a short-term type of focus that we develop!