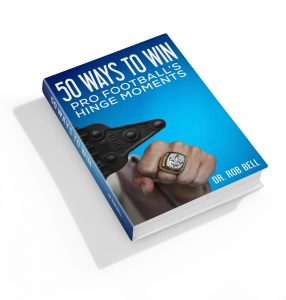 The Super Bowl may not represent the two overall best teams of the season, however, it does represent the two teams that played the best. The nature of upsets and playoffs allow anything to happen, which is why we love it.

The margin between winning and losing is so very close that Hinge moments from every season, decide the champion.

The reactions and responses from champions vary greatly as well, and they aren’t always what you think.

For example, which Super Bowl Champions quarterback thought to himself during the celebration, “Is that it?”

Which head coach, immediately after winning the Super Bowl, was in the locker room, but now felt like an outsider?

Interesting facts and themes also emerge from the championship seasons.

For instance, for twelve separate seasons, the back-up quarterback became the starting QB for a significant amount of playing time. For three straight seasons, 1999-2001, the back-up QB actually became the winning QB.

However, there is ONLY ONE common thread that existed across Super Bowl-winning seasons. If interested in learning about what every super bowl champion possessed, check out the .99 e-book here.

(Video) What We Can Learn From Every Super Bowl Champion