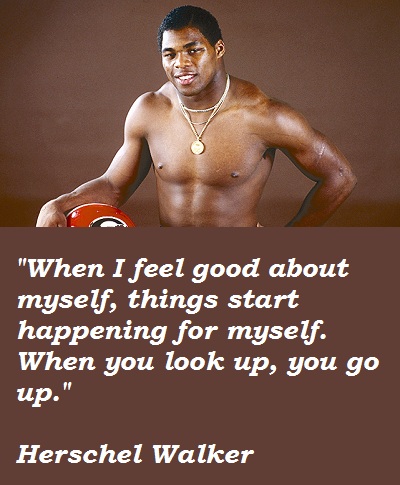 Herschel Walker was made fun at school and never went out to recess because he was afraid of getting beat up. His teacher used to put him in the corner of the room because he had a speech impediment, and called him “special.” His father used to give him a quarter to buy a snack at school. Herschel would give it to another kid, so they could buy a snack as long as they would talk to him. After the kid had finished his snack, he would go back to making fun of him.

The last day of school in 8th grade, he went out to recess and got beat up, bad. He said to himself “never again….When your name is called, you have to stand up.”

Mental Toughness is often caught rather than taught. From that Hinge moment in school, he didn’t train to become a great athlete, he trained to become a super hero. How did he do it?

He transformed himself from one of the slowest guys in the school, to one of the fastest in the state of Georgia by the 9th grade.

During an interview with Jim Rome, Herschel was asked when was the last day he missed a workout? He replied “NEVER.”

Sometimes, our mess becomes our message. Mental Toughness means doing what others aren’t willing to do.

Dr. Rob Bell is a Sport Psychology coach. DRB & Associates based in Indianapolis works with professional athletes & corporate athletes, coaches, and teams building their Mental Toughness. His 2nd book is titled The Hinge:: The Importance of Mental Toughness

Get Rid of Your Mental Baggage

Mental Toughness is a Voicemail Away

Why I Quit Drinking
Scroll to top