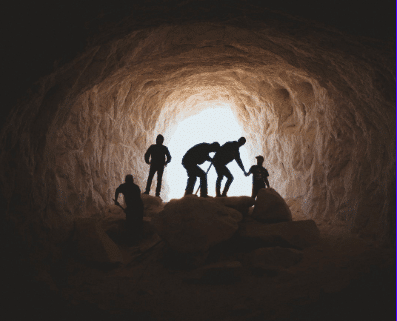 Every single morning when I wake, an awful thing happens. The very first voice is an attack on myself and it says “you’re not running/swimming/biking this morning!”

The very first voice of the day.

Do you ever have that type of negative voice pop up?

Early on in life, before mental toughness, that negative voice won. It was a wide path that led to hard drinking!

Nowadays, I mostly win this battle, because my routine and plan and goals of an Ironman and Ultra-marathons and 100 Mile trail runs, but it’s still there nonetheless. We can’t magically get rid of the adversity, struggle, or hardships.

If you want to change your situation, we have to dig deep and overcome!

I was at a middle school dance when I finally summoned up the courage to ask this older 8th grader to dance. We’ve all had those tense moments!

Besides, I was told early on in life that the worse answer you can get is “NO.”

See, when I finally walked over and asked her to dance, she said something like “oh that’s sweet, let me get back to you.” Maybe she even patted me on the back or head, I can’t recall.

Well, I scurried back to my spot at the gym and eagerly awaited my dance. I was excited, because I had heard a “yes” NOT an “I’ll think it over.”  But, I was stuck inside of my own head. I couldn’t ask anyone else and maybe, just maybe, she really did want to dance.

Then, after a few more slow songs, it was evidently clear that it was not going to happen. Then, the dance was over.

I learned “let me think it over ” is the worst answer I can get. A NO would have been more painful at the beginning, but we can accept it and move on.

Acceptance is the key to all of our problems.

I was fired by my professional golfer weeks after spending the entire week at The Masters. It tore me up, because I was fired after I did a good job! I was embarrassed and heartsick. It took me months to get over actually.

During that time, I didn’t progress, I got worse because I never accepted it and moved on.

We have to let go of the anger, resentments, and other people’s expectations.

Spoiler alert: Bad stuff is going to happen, life is unfair. So, can you accept it and move on, or do you stay bitter and not get better.

Our mind has one job, to keep us safe and out of pain. It’s not focused on how to dig deep, Our mind wants us to quit!

It’s one reason why the negative voice in our head exists. It’s not focused on making you better, it just wants the path of least resistance!

We all seek comfort in life. The scene of relaxing on a beach with an umbrella drink is glamorized, more so than showing someone chopping wood. It’s more comfortable and relaxing to be on the beach.

But, when we ALWAYS seek comfort, it actually makes life hard.

We have to seek ways to push ourselves in all areas of our life.  Check out our article on 4 reminders to build mental toughness .

The best way is to push yourself in all areas by incorporating the JUST ONE MORE strategy.

3. When it’s all said and done, more is said than done!

EVERYTHING in life is easier said than done.

It’s easier to sit and watch TV than it is to exercise.

It is easier to go for a jog than it is to do wind sprints.

It’s easier to practice than it is to compete.

It is easier to NOT push ourselves than it is to push it.

It’s simply easier to go through the motions.

Jon Morrow is a quadriplegic, and one of the most successful bloggers on the planet. He had to overcome massive challenges. Speech recognition software has enabled him to write articles read by more than 5 million people. He’s become a multi-millionaire, but more importantly has helped thousands of people dig deep and overcome themselves!

Here is the article by Jon I recommend  7 Life Lessons From A Guy Who can’t Move Anything But His Face!  His toughness and ability to persevere has stemmed from living out his beliefs, his actions!

We All have an ACE card up our sleeve- A.C.E.- Action Changes Everything!

James Lawrence (The Iron Cowboy) Summed up perfectly in this 30 second clip from his documentary about 50 Ironmans in 50 states in 50 days.