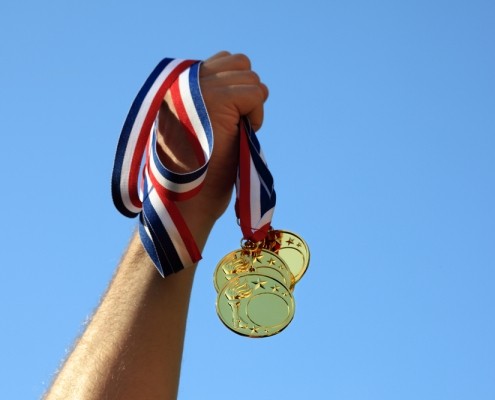 Why You Should RUN AWAY From Virtual Races

Virtual competitions have popped up like dandelions in recent years because these companies have found creative ways to simply separate you from your money.

Sorry, but virtual race companies trick you into thinking you’ve accomplished something when it’s really all about the bling. Can you even Google VR races and see anything that does not have to do with the finisher medal or bling? Seriously, Disney has the best finisher medals for their fake races, which is why people are willing to spend tons of money.

We’ve become a participation medal society, obsessed with making sure everyone sees the medal we’ve earned. You SHOULD be proud of entering and completing that REAL race! You put yourself out there and did it.

But, please keep those virtual races medals in your sock drawer.

Why running a REAL race will always be the best option.

But signing up actually keeps many people from running a race, to begin with.

There is fear and apprehension to signing up. It takes commitment and guts to “put yourself out there and race.” Signing up forces you to deal with your own head trash and overcome the obstacles that you’ve created for yourself. Dealing with adversity is how you build your mental toughness.

Signing-up is how you crush racing and how you crush life,  Once you sign-up for a real race, your mentality changes, and you’ll train and prepare. Heck, we prepare and train more than we actually play and perform. Signing up and doing a real race is more about who you become on this journey rather than what you achieve.

Only YOU know the obstacles you must face: fear of finishing, a certain time, people looking at your body, the nervousness of simply doing it, not having a support system in place, or not having a big enough “why”? Simply put, you need to turn your excuses into your reasons why!

Now, if you decide that these mental blocks about what others think are too big for you to overcome, then fine, be done with it. Don’t race! I’m not shouting that everyone must race. Now, your life becomes exponentially better when you face your fears, it’s totally your choice.

But, DO NOT acquiesce into signing up for a virtual race instead!

This is not how you win the battle over your own mind! The excuse why you didn’t sign-up for a real race will still be present later on, and it’ll grow actually because you didn’t face it. If you don’t want to race, then don’t, but if you do and can’t muster the courage right now, then train and look at another real race in the future!

Running a real race is an experience that includes the unease the night before while laying out your race kit. The early morning wake-up call and brisk cold air, and having to run to use the bathroom before the start. The nerves, the jitters, and excitement is what LIFE is all about! You don’t have to experience those feelings, you GET TO! You get to overcome and face your fear and do it anyways.

Third, races bring out the BEST in people.

The easiest place in society and humanity to love on one another is in an actual race! That’s why #bostonstrong was so meaningful after the cowardice bombings at the Boston Marathon. I guess the virtual race facebook group encourages one another too, but it’s social media, not real likes.  During my Ironman, EVERYONE kept cheering each other on and you could feel the love and support because we were all trying to achieve the same goal! We knew what it took to complete the goal so it naturally brought out the best in people.

You’ll cheer people on and you allow others to cheer you on. It involves volunteers, coaches, race organizers, and bystanders. It becomes a community, a flash mob of encouragement, where the real race tries to bring out the best in everybody.

During a local 10k race that had two loops, I passed a really old lady who was grunting through the 5k. It was obvious she was not a runner and was hurting, but she wasn’t going to quit. I stopped and kind of jocked her a bit, and told her to “remember her ‘why’ and that someone was looking up to her!” As I took off, she yelled: “Oh, thank you!” The interesting thing is that she helped me out more than I think I helped her, but it was true, she WAS inspiring someone younger, I guarantee it!

Now, I get it, you may be thinking, “Rob, why bash and hate on a fit moms club?” They push the strollers and want to enter the virtual race as a group and get fit and some of their money goes to charity and that’s a bad thing?

Anyone seriously committed to getting fit is a winner in my book because they are putting themselves out there willing to make a change and get better. Fit Mom’s club certainly doesn’t need my permission and I’m not hating on them, as much as I’m put off by the virtual races themselves.

There was a very successful financial advisor whom I stayed with every year at a PGA event. As I was asking one night about money, he said: “The world will always try to separate you from your money.”

The Life-Changing Impact Of A Coach
Scroll to top