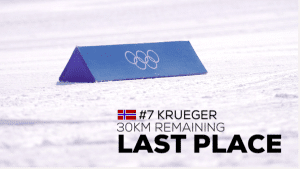 How Did The Miracle on Snow Happen?

Simen Hegstad Krueger, a Norweign, was in his first ever Olympic race. In the opening 150 meters of the 30k cross-country event, he crashed, other racers piled on top of him, and he even broke his pole. His immediate first thought after the crash was “It was over.” He was in last place out of 68 of the other top athletes in the world. Then, the miracle on snow happened! 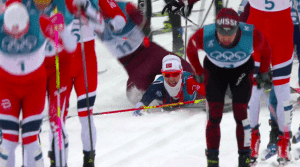 He fought back and ended up winning the Gold Medal by over 20 seconds! How does this miracle even happen?

Could it be that the crash actually helped him?

Before and during performances, our arousal levels naturally rise.  We want to do well so there is a ton more energy and anticipation before important competitions. There is a tendency to have expectations before competitions as well.

Expectations are not always a good thing. Confidence is good of course, but expectations have to do with the outcome and the results are out of our control.

Confidence is good of course, but expectations have to do with the outcome and the results are out of our control.

So, when a situation like a crash occurs, it forces a major shift in attention and the expectations are literally removed. His first thought after the crash was “It was over.” So, all he could do, is simply race. No thoughts on tactics or strategy, just execute his technique and go.

The Miracle on Snow has been experienced by many other athletes that have expectations removed.

In 2002 at the Tampa Bay Classic, K. J. Choi had been suffering from terrible stomach pains. Many saw him grabbing his abdomen during the final round. He later stated that the pain made him say to himself, “I’ll just take it hole by hole.” He won the tournament by an amazing seven shots and had his appendix removed the next day.

In 1995, Ben Crenshaw won the Masters. What’s remarkable about this achievement is that he arrived at the tournament with his game in shambles, barely making cuts, and the Sunday prior, he had lost his teacher and friend, Harvey Penick. He flew back to Austin for the funeral on Wednesday evening, the night before the tournament. “I don’t know how I got through it,” Crenshaw replied. “I still don’t.”

Padraig Harrington hurt his wrist so badly prior to playing the 2008 Open Championship, that he only gave himself a 50 percent chance of actually finishing the tournament. In fact, he remarked that if he had not been defending his title, he probably would not have played. “It was a great distraction for me,” Harrington said. “It took a lot of pressure off me. It took a lot of stress off me. The fact that I didn’t play three practice rounds like normal for a major was a big bonus. I was very fresh going into the weekend, and [these] thirty-six holes was a real battle.”

All of these competitors basically had their own miracle on snow moment and were able to accomplish greatness in spite of their circumstances because they had no expectations on the outcome.

Having no expectations in turn forced them to focus only on what was in front of them. They got out of their own way!

It’s the same for us as well, when we get out of our own way, by focusing just on the next play, this moment, we all perform better. No expectations!

It’s not known “what-if” he didn’t crash, would he have still won the Gold medal? Well, we don’t know because “what-if” never happened, he did crash, and he won.