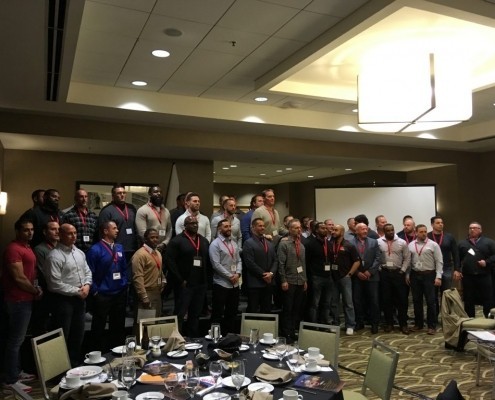 What I Learned Speaking to the NFL Strength Coaches

I delivered the keynote address to the Strength Coaches banquet to basically kick off the NFL scouting combine.

It was really cool.

If you want to hear the talk that I gave to this incredible audience, click here to watch it.

I love coaches and it was humbling to have these giants talk with me about their own Hinge moments and mental toughness.

It was a fantastic dinner, listening to great stories, and just meeting such inspiring coaches.

They gave the awards after the dinner and Jerry Palmieri received the lifetime achievement award. He wonderfully represents the NFL strength coaches. He just retired from the Giants and has been in strength coaching since 1983.

He gave an excellent speech and talked about the three (3) things he learned from coaching. It was after he mentioned all of his mentors and proteges in the room that it dawned on me…

This guy has personally coached thousands of athletes and mentored hundreds of other strength coaches. You can safely estimate that the guys he deeply impacted and directly changed their lives just because of his coaching is generational.

Then, from the people he directly influenced to the many numbers of people that they themselves impacted gets pretty mind-boggling.

When I looked around the room at the head NFL strength coaches and the assistant coaches, the sheer number of people and families influenced, changed, and impacted in some fashion from the coaches in that room was easily in the millions! MILLIONS.

Coaches truly are the most important hinge in people’s lives.

The best part is that everyone is a coach!

You can’t know the number of people that you impact, but you do make a difference.

The world is different because you are in it. If we focus on making it better and impacting people, our lives change as well.  We don’t need to be one of the nfl strength coaches to impact others.

Thanks to all the people who started the 30 Days to Mental Toughness Challenge. Excited that you’re taking part and creating a better YOU and US.