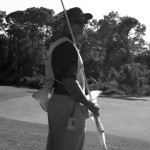 It takes mental toughness skills and a focus that I feel everyone can achieve. But, it ultimately depends upon how bad do you want “IT.”

When I was teaching Sport Psychology at the university, I had my students write out their own bucket list, except they had to frame the list so they would see it every day.

That’s how to make a hole-in-one.

If I hit it close, it was a good shot, but it went in, so I was lucky (irony). My first hole-in-one came with a 9-iron in my hand. Hey, it counted.

I am happy that I actually achieved one of the goals that Ted Leonsis hasn’t had yet, a hole-in-one.

It actually helped calm me down and it’s part of my own how to make a hole-in-one.

The best part was when my second marathon came around, I knew how to train, what worked, what didn’t, repeated the behaviors, and ran faster, a 3:22 marathon…The racing continued and it progressed to Ironmans, ultra-marathons, and 100-milers.  And oh so close to another how to make a hole-in-one.

It’s also a big reason why I merely signed-up and competed.

A Commercial in 1992 & Sport Psychology
Scroll to top