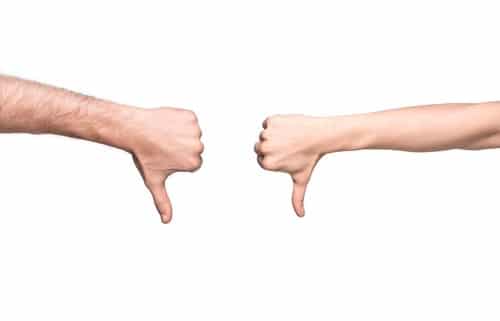 We All Need This Type Of Person In Our Life

Being negative is like having a cold. It eventually wears off on others.

If there is a room full of twenty people and three have a cold, but 17 are healthy, The chances are greater that most people will also get sick, rather than all healthy.

It is the reason why negativity is more powerful than being positive.

However, we need to surround ourselves with positive people who view things and events with gratitude and perspective. It’s too easy to be negative.

With that said, this type of person in our life that we need to be successful actually has to possess that negative outlook.

I was once in a meeting with a few support staff of a professional soccer team.

This meeting included a medical doctor and head athletic trainer of the hospital that provided services to the team. I was brought in by the head coach and had already begun working with the team providing mental skills training. I merely thought that this meeting would be decisive in terms of a contract and reporting procedures and such.

I was excited and prepared!

But, this meeting did NOT go well.

The inquisition ended with the medical doctor telling me that I was not a real sport psychology coach and that the team didn’t need mental training, they needed a clinical psychologist instead to handle the one case of depression on the team.

I tried to play every card I had- I pulled out my Ph.D. card, my working with professional athletes card, even my sports psychology certification from the national body. Nothing obviously worked in my favor.

Walking out of that meeting, I felt pretty small and not good enough. Honestly, it cut me bad.

The kind of person in our life that we all need is the one who says “you can’t do it” or “you’ll never be good enough!”

It was the main reason that the book  PUKE & RALLY was written!

Almost every person of success has had that person who told them they wouldn’t make it.

Now, probably the same amount people who were not successful were told the same thing that they weren’t good enough. So, what was the deciding factor?

Being told that we are “not good enough”, “that’s a dumb idea”, or “don’t try it” becomes a fish or cut bait time in our lives.

What takes place mentally when you hear that you’re not good enough?

Chances are it is one of two things. We either accept it and agree with them, OR we use that person as a source of self-confidence. It solidifies the belief that we must have in ourselves in order to truly achieve greatness.

They turn into a person of “I’ll show you!”

Every successful person was able to use those words of negativity to their advantage. They were driven by that negative person to be confident and were able to pull every ounce of their ability out of themselves. Amazing to think that we need this type of person in our life!

“I’ll show you” became their rallying cry! Their “remember the alamo!”

Kalin Bennett became the first autistic basketball player to sign a DI scholarship. He has a remarkable story of perseverance because he was non-verbal until he was 8 years old.  Bennett spoke to the initial therapist who gave him the diagnosis that he might never talk or walk.  He told her “I hope you haven’t told anybody else that because you could ruin their lives.”

She gave him the lightning and she became the rod. He should actually thank her because she helped make him!

At The NFL combine, I posed the question to the head strength coach of the Cleveland Browns, Larry Jackson.

An awesome guy and without hesitation, “Mrs. Barlow” was his reply. She said, “I would end up like my brother.” I was kind of just drifting in life, but when she told me that, it gave me a focus and direction.

When I’m coaching on the PGA tour and I tell one of my players that he won’t execute a certain shot, almost without fail, he’ll channel the vitriol and it’ll be “Watch me, I’ll show you.”

Arian Foster had a good NFL career with the Houston Texans, playing over 8 seasons and rushing for 54 TD’s and over 6,500 yards. However, it’s even better considering he went undrafted coming out of the University of Tennessee.

When he was asked by a teacher in grade school what he wanted to be and he answered a star in the NFL, his teacher laughed at him and asked him “what else?”

That moment and person motivated him throughout his entire career.  He admitted though, there was not that mentor or guidance from a strong figure throughout his career that could help him always channel it correctly.

The danger of the “I’ll prove you wrong” mentality is like a fire.

A campfire or roaring fireplace is great and heats really well. But, these fires are also controlled.

A wildfire, on the other hand, can cause sheer destruction.

The mentality of proving people wrong can have anger at its core, and revenge or resentments are like poison. We can walk around all day in me vs. the world mindset where everyone is a possible target toward proving them wrong.

The same hot water that hardens an egg, is also the hot water than can soften a potato. It depends on the level of confidence in ourselves.

The result of having this type of person in our life is belief and confidence in ourselves. When someone tries to tell you to have a plan B, just make a better plan A. When you’re told you’re not good enough, you better know that you have the confidence and persistence to make it happen.

Confidence in ourselves is the true “I’ll show you.” And True success means being able to root for everyone.