What Really Happens When You Prove Yourself Right ?

When someone close to you tells you, “You can’t do something” , “that’s a bad idea” or ” don’t try it”,  it becomes a lightning strike.

The most successful people in the existence of the world were told either through their circumstance or by someone else that they “were not good enough.”

We either believe that person or we believe ourselves. We cannot be on the fence during these moments. When you prove yourself right, you’ll make an impact for others and yourself!

Why a lightning strike? 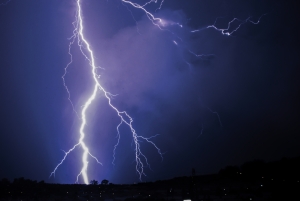 Lightning is the most powerful force that one can imagine and it directly connects the atmosphere with the earth.

Lightning strikes can have temperatures of 20,000 degrees Celsius, which is hotter than the sun. It can produce up to 10 billion watts of power. Meaning, just one strike could power up to 56 homes for an entire day.

But, there is an even more dangerous and powerful type of lightning.

It’s called POSITIVE LIGHTNING and this type of lightning comes from “out of the blue.”

Positive Lightning is being told “you’re not good enough” or that “you can’t do something.”

The lightning strike can cause serious damage and ruin people OR it can serve as the variable that determines the path of your entire life.

WE CANNOT BE ON THE FENCE when we are told by someone close to us, (or our circumstance) that “we can’t do it.”

We will either believe that negativity OR we will believe in ourselves. What happens is most people try to prove others wrong, but what really happens when you prove yourself right? You make an impact in life!

Now, coaches, teachers, bosses and employers, too often make the fatal mistake of being a lightning strike! We’ve all made this mistake.

As important as these painful moments are, we all need a lightning rod in our lives as well. However, we still can all be the lightning rod for others! We need someone to protect us from that strike!

ONE person to speak truth, encouragement, focus and confidence that WE CAN DO IT! It is a hinge moment of connection between who we are and who we will become.

It only takes one.